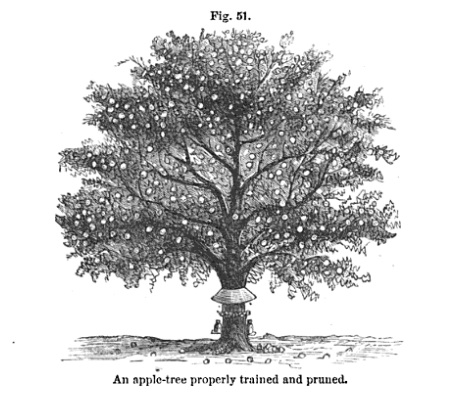 Concerning Newark’s famous old time cider the following specific information on the ingredients thereof will be new and of interest to many readers. Our informant was the late John Oakes of Bloomfield. He said some time ago:

“Quite a large portion of the land in Bloomfield in the last century, the eighteenth and the first third of this the nineteenth, was in farms. They were small, comparatively few of more than fifty acres. The farmers raised on the land rye, oats, Indian corn, potatoes, and buckwheat; very little wheat and hay. They had large orchards of apples for making cider which under the name of ‘Newark cider’ was known over a large extent of country, shipped to the South, as well as to points in these parts. It was celebrated as the best. It was made the best from two kinds of apples mixed, two-thirds being Harrison apples, which were small and a light yellow color, a little tart and very juicy; and one third being the Canfield apple, large, red and sweet, both seedlings having originated here.”

Thus Newark cider was the product of Newark fruit and Newark invention. -JFF

And this from: History of Essex and Hudson Counties, New Jersey, Volume 1. Everts & Peck, 1884 – Essex County (N.J.)
“The apple was planted extensively soon after the settlement, on a wide range of the cleared land.  As early as 1682, Governor Carteret, writing to the proprietors in England said
“At Newark is made great quantities of cider, exceeding any that we have from New England, Rhode Island or Long Island”.
The high quality of Newark cider has been maintained from then until now.
The red clay soil, the debris of the red sandstone, has been congenial to the growth and fine quality of the apple and pear; in fact there is no part of the State of New Jersey where fruit is superior to that grown in the county of Essex, and where the soil has been properly tilled and fertilized, agricultural products have always met the expectations of the cultivator.”

And from: The Western Agriculturist, and Practical Farmer’s Guide. Robinson and Fairbank, 1830. Nicholas Longworth Esq. – of the famed Catawaba wines of Ohio, a man considered the father of American grape culture – writes that the Harrison, Campfield, and Graniwinkle

“are the apples from which the celebrated Newark cider is made.”

Longworth experimented growing Harrison and Virginia crab apples in Ohio for cider, but he failed to achieve a wholly successful result, and details his effort thus:

“I obtained from Newark, New Jersey, many years since, some trees of the Harrison apple from which their celebrated cider is made. The cider I made from them was aqueous and seldom retains its sweetness till the proper season for bottling.

The best Newark cider is made on the Newark mountains on a poor stony soil.

On a recent visit to that state I particularly examined this apple in their orchards to endeavour to ascertain the difference. I found the apples knotty, and of a less size than the same fruit in the West, unfit for the table but evidently possessing more of the saccharine principle. The Virginia crab retains all its fine cider qualities with us in great perfection. No soil, no climate. no cultivation can make it edible. To reconcile these apparent contradictions writers have furnished us with no clue and we must endeavour to deduce them from analogy and reason.”

Proceedings Of The Farmers Club

Mr Daniel B. Bruen, Newark, N. J. now brought forward a of cions of the apple, and read in connection therewith a report, of which the following is the substance:

This is the Harrison apple; its origin is in Orange, Essex county, N. J. and named after Simeon Harrison, owner of the farm. It is the most celebrated cider known. It bears large crops, fruit small. Eight bushels produce one barrel of cider; it is very rich in saccharine matter. This, the Campfield apple, has its origin in Newark, named after Matthew Campfield, one of the first settlers of Newark, almost universally used in the proportion of one-third with the Harrison in manufacturing the celebrated Newark cider. The fruit is rich in saccharine matter, and keeps well until spring; good for cooking, very little better for table use than a well-soaked cork from cider bottle.